It has been quite sometime since I showed my face here. And, I can number out a lot many reasons for the same – all, which even I myself would not really believe!!!!!!! I had been hunting for an idea to come up with a post at least this weekend, but nothing struck me so forcefully so as to make one!

I may say, the weekend has been really dull, with nothing much to do!

Yesterday, the lil adventurer came up with a request, which was wholeheartedly welcomed by me! “Amma, my “All about me” chart has become too old, I would like to make a new one, that too a hand-made one, what do you think?"

Yup, the one which is already there was made when he was in LKG. That was a readymade one, which I bought at some exhibition. I thought his idea was good enough make my mood bright too….. 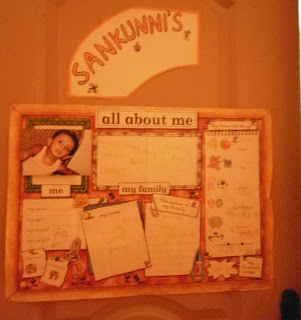 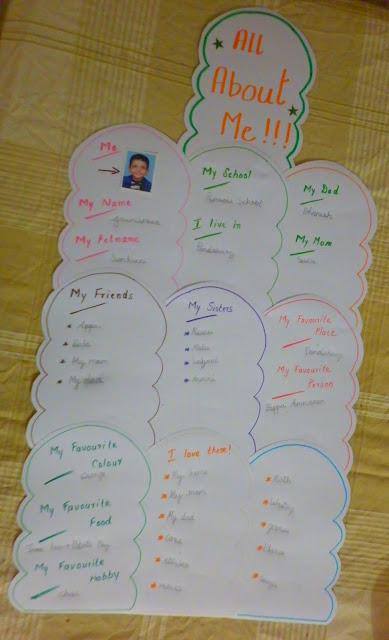 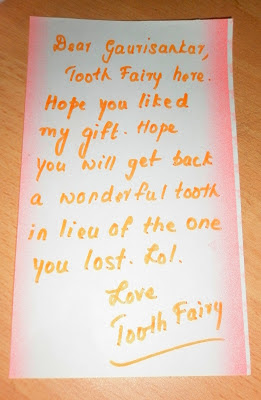 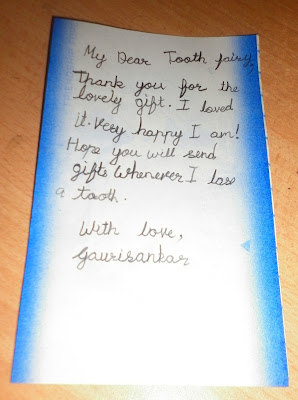 They did give time a Break....

Nothing is more tiring in life than a dry weekend. After the kind of neurotic restless running that we do, we all do wish for a blissful weekend. A beautiful weekend can act like a psychological pain balm and this was exactly what I felt this weekend. ….our first weekend of the year was made blissful by Sabi chechi and Appu chettan…, we missed the kids though! Just like me, Sabi chechi has fallen in love with Pondy, so a visit with kids is already planned. 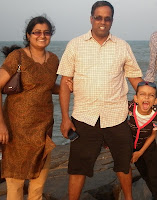 Though a short visit, I guess we could spend some quality time together, and that was what we liked about this weekend. Sight seeing wasn’t really in the list and so there was no running around. We really enjoyed the beach stroll with them. After a long long time, we got to listen to the police band, playing some of my favourite hindi songs…

The time frittered on shopping was great too…the Exhibition at the AFT ground was an awesome experience, specially because I had the company of another shopping freak!!!!!!! They had some exquisite stuff…

I wish all the weekends are gonna be blessed with the presence of our loved ones, Pondicherry is surely a place for you to give your time a break……so plan soon….